Cat-owners like me are always worried about what is good and what is not for our pet. By bringing a kitty and raising it at home, we fully acknowledge that we are responsible for his well-being.

Being in charge of another life is at times stressful, but because we love our pets, we get to enjoy it at the same time. And of course, life becomes easier when we are in an active forum with other cat parents. Since we are friends, I am here to help you out with your confusions.

Today we are going to answer another question, and that is: Can cats eat catnip? This question sounds more like a tongue-twister than it is an inquiry. But if you would like to know the answer, just read on. 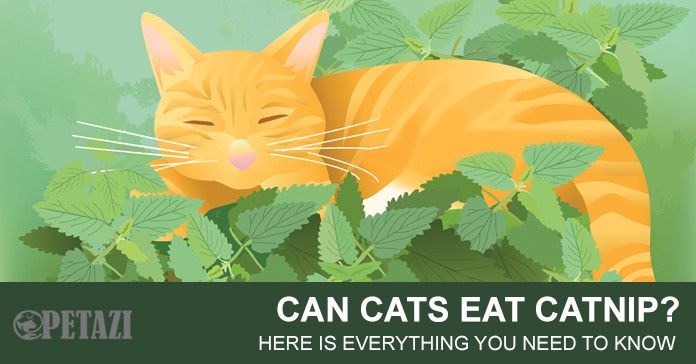 So what is catnip?

Catnip is a herb which is recognized under the name of the mint family. It is also called catswort or catmint. The plant contains some kind of chemical compound called nepetalactone which attracts cats. Sounds mysterious, right? I bet it’s the first time you have heard about that word but we are going to learn more about this as we go further.

Nepetalactone is a stimulant. This chemical that affects our cats can be found in the leaves and the stems of the plant. Cats who have sniffed it experience a feeling of being “high” which is the same experience as when people smoke some medical marijuana. The effect lasts for not more than ten or fifteen minutes, and then your kitty goes back to his normal self. After your cat has recovered, catnip can take another effect after an hour or so.

However, it should be noted that not all cats react to catnip. Some may be heavily affected by the chemical compound that is in it. Some may be completely disinterested with the stuff.

First of all, let us understand the different types of catnip.

I know you are more interested in finding out whether your cat can eat catnip. So let us go straight to that question.

Yes, cats can eat catnip. It contains no toxic substance so you do not have to worry about food poisoning in your feline pets.

However, catnip should be fed in small to moderate quantities only. Feeding too much catnip to your cats may make him puke a lot and even result in diarrhea. That is a lot of mess to clean up so you may want to monitor how much your cat has been eating.

Catnip triggers a different reaction as to when it is simply smelled and when it is ingested.

What happens to cat when they sniff catnip?

When sniffed, catnip makes cats act a little crazy and hyperactive. If you notice your cat acting tipsy or full-blown intoxicated, it is likely that your cat may be feline sensitive to catnip. It may also manifest through your cat being spastic (e.g. rubbing on everything he sees or rolling around the floor).

Catnip aroma may contain pheromones that put our cats in a state of bliss. So if you have idle cats at home and you want to see their wild side, you may want to get some catnip for them.

Nepetalactone or Nepeta cataria may also result to aggressiveness among cats. However, the effects of catnip are a hit and miss. Only 50% of cats reacted to catnip. Some say that the reaction to plant is a genetic thing. Some cats have been inherited by what they call a “catnip gene” while others were not.

Aside from this, kittens are immune to the chemical Nepetalactone. Baby cats younger than eight weeks would seem indifferent around a catnip. Only cats aged seven months may show signs of sensitivity to the herb. It is said that the herb smells something like cat pheromones. The following are the other possible reactions of cats to catnip.

What happens to cat when they eat catnip?

Eating catnip gives them a laid back feeling. The oils inside the plant will release more of the chemical compound nepetalactone. Catnip can act as a sedative when consumed this way. A sedative is a kind of like a drug that makes someone calm or sleepy. In this case, it can make cats less purr and meow, if you know what I mean.

Catnip offers two or three benefits to humans. First, it functions as mosquito repellent which avoids dengue, malaria and other diseases transmitted by mosquitos. Second, it is known to have sedative properties which induce sleep and helps people relax. Its effect can also be comparable to chamomile. But do cats get any benefit from catnip?

Well, yes. Catnip makes our cats happy. But it is not because catnip is nutritious. Catnip is not something our cats can get vitamins and minerals from. It does not have protein or taurine. The benefits of catnip to cats goes way beyond the ingestion of it.

Catnip can actually aid in kitty training. For instance, if you want Tabby to know the places where he could play, you ought to use some catnip to lure him in there. This would avoid your cat for scratching your good furniture.

Is Catnip Harmful to Cats?

Generally, cats can be so close to catnip, and it would not hurt them a bit. However, I should warn you about catnips and pregnant kitties. Research says that catnip is not safe to be sniffed or consumed by cats carrying kitties inside them.

The reason to this?

Catnip is known to be a uterine stimulant. Putting this substance near mommy-to-be Felicity is not advisable by veterinary practitioners. Even pregnant humans are not allowed to go near catnip as it may result to uterine contractions.

Is Catnip Overdosing a Thing?

Catnip may not be dangerous to cats when eaten or whiffed. However, cats can still have too much of it. Although, not sure if an overdose is a right word for it or not.

You see, large quantities of catnip can make cats sick. But veterinary practitioners said that cats can actually sense when they reach the limit of catnip tolerable by their body so it is unlikely that they will experience the overdose.

Unless of course, someone forces them to feed on catnip which is just cruel. And even though he experiences mild health troubles because of catnip, his body can recover in time with rest.

No, catnip is not addictive. Even with its very alluring smell which seems to hypnotize cats into acting like a whacko, it would not affect your cat’s appetite or make some kind of feline disorder to your pet. That does not mean, however, that you should have your cats nibble on catnip leaves 24/7. The treat will be more special if you give it to him occasionally.

How Does Catnip Do It?

What catnip does to cats is still a mystery. But there are a few explanations to how catnip works its way into a cat’s brain.

Fun fact: Did you know wild cats also experience the magic of catnip? Lions, tigers and other felines in the wild are observed to be affected by the chemical compound found in the herb. Aside from being ecstatic, these felines have been found to drool, jump and seem to be extra energetic after smelling catnip.

There probably is a reason to why catnip is named that way. It has this special relationship with cats that no other food or object with the strongest scent has been able to establish. It seems that catnip is our cat’s most favorite thing. Now I’m a little bit jealous! But I do hope I’m still my cat’s favorite human. I should be since I am the one who buys her the catnip she enjoys.

The truth is, there is no verified explanation to why cats react to catnip the way it does. The physiological responses of humans and cats are different and we are quite unfamiliar of how our pet’s brains our wired. All that is known is that catnip is safe for consumption and sniffing. There is no such thing as that of a dangerous catnip overdose or catnip addiction. There is no need to think negatively about catnip. But it should also be said that catnip is not really on top of the primary needs of cats. It is just something recreational.

There are some things we must say again as a takeaway from this article.

First, not all cats can be affected by catnip. Only half of the total cat population have the sensitivity for it. Baby cats also have an aversion to the herb. So do not expect your cats to act all crazy over the toy catnip you bought if it is your first time giving her catnip present.

Second, catnip is not something for a pregnant feline. It is just not.

Third, catnip has a different effect when it is ingested and when it is simply whiffed. Catnip, when whiffed, transforms our cat into this ball of energy. It brings him to the feeling of being on cloud nine. On the other hand, when catnip is eaten, it makes our cat calm and relaxed. There really is some sorcery in catnip, don’t you think?

I hope this information has provided you some clarity about cats and catnip. If you wanna share your insight, don’t hesitate to drop by the comment section. I will listen to the stories you have for me and for the other readers. If you know other cat parents who may be wondering whether or not catnip is safe for cats, click share and spread the information. Bye!

Petazi (PET A to Z Information) is exactly what it sounds like, a website that aims to be the ultimate informational resource for anything and everything related to dogs, cats, pets and animals!
Contact us: [email protected]

Can cats eat blueberries? Here all the facts you’ve been looking...

Can Dogs Eat Cinnamon? Your Best Answer Can Be Found Here